Busy in the Kitchen

Oops - this should have been posted April 2016!


Since I have been back from Hampton, I have been busy. In the fall (2015), I was busy talking to everyone about my experience there and some of the epiphanies I had.

I was especially excited to talk with John Moran about my experience as he had a similar one. That discussion lead to us collaborating on a Tudor Feast for Ealdormere's Kingdom Arts and Science Competition. We wanted to try and recreate a full feast with all the right servers and pomp and ceremony.

We wanted to create the atmosphere of a Tudor Dining hall with ceremony of hand washing, seating by rank, entering the hall by rank, etc. THL Christabel worked hard as Master of the Hall to ensure this was followed. Not to forget to mention ALL of the volunteers who served the dishes. This is a very difficult thing to accomplish in an SCA setting. :p

Unfortunately for me, there are no pictures of either of us in the kitchen or of the actual feast that I can find. We were excited to do this for our King Quilliam III and Queen Domhnail II as Their reign was a Tudor Reign. (Very exciting!)


The menu was as follows (and all items were of bite size, due to the amount of food we were producing):


The dishes going to the head table were all done in Subtleties. John made some amazing pieces along with our friend Lady Lerthan.

In the Octopus above the shrimp and sauce were placed in the glass dish (and tuned upside down) and when served it was removed and she shrimp rolled out.

It was a very long day with many bumps and things to do better next time, but I enjoyed myself.

Feast of the Hare sure was unusual this year!

Ah Feast of the Hare, always an interesting event and I usually try and go. What made this year different was that Rick Mercer was going to go and film for his show the Rick Mercer Report. (If you are not from Canada and reading this - he's a national treasure of comedy. His rants are excellent and catch Canadian sentiment exactly! Check out his you tube - Mercer Report)

What made this year different, was that I was working hard at getting my Queen's Prize Tournament (QPT) work done, so I was planning on passing on the event, but I got a call from my partner in crime Avelyn, swearing me to secrecy about Mr. Mercer's attendance. She wanted to pick my brain for some more demo like activities he could partake in. So I (the nice friend that I am, lol) offered to help and enlist my Tudor cooking partner in crime John Moran to use his UBER period outdoor cooking set-up. Poor John, he always puts up with my voluntold activities. Thankfully he was free to do it and we can play outside for the day. I did promise to help setup/take-down/and pack stuff in my car too. (I think that helped)


The only thing that put a wrench into my plans was that there was a death in the family. I was super busy cleaning out an apartment and dealing with lawyers, always a crazy thing to do. Avelyn said I didn't need to do it, but the image of the SCA was at stake. This is a national TV show, and we wanted to make sure we represented our hobby well. To be honest, there was no guarantee that we would even make it off the editing room floor. But we had to try and represent all the non-fighting cool activities that happen at event (let's be honest, fighting always gets great coverage, it loud, flashy and everyone looks great), so the competition can be fierce.


The night before the event I head over to John's for load-up, I tell him I am planning a White Pea and Bacon Pottage, should be fairly easy to cook over the fire and will hold up in case the Rick Mercer crew take longer to get to us. We also decided we need to load up like this for Trillium War, so John can have a little more space in his SUV for his stuff.

Morning of arrives and it is a cool day (won't get warmer than 8 degrees C.) but we will have a fire. Wilhelm come over to help us set up the tent and keep up company as we got the fire started.


I was super excited to get right into working with the fire. John spiced his meat, and got it on the rotisserie (man powered) while I got started. I had my white peas soaking overnight drained and ready to go. The trestle tables was set up for chopping of the onion, garlic and bacon. So I put John's larger cast iron Tudor pot (Bell) on the fire to warm up. I added the bacon to the pot to cook down, and so I could use the fat to cook the onions. Once the bacon/onion was decently cooked I added some garlic. At this point many of the fighters who were fighting down wind of our cooking, stopped by to see what was going on, and to comment on how it smelt delicious at 9am. :D

I stirred up the mixture and added the beans and chicken stock to cover the beans. Basically it sat on the fire (mixing it once in a while) covered till lunch time. The texture was amazing, like a nice mushy thick porridge. (hence pottage. lol) We were told that Rick was going to come over and as some questions and taste the food.

I spent all day outside in November in Ottawa, which is unheard of. lol I brought a wool gown I had been working on since the summer and watch all the fighting. I got to see Avelyn close the door on Rick's face when he was in full armor...lol and watch some great dancing just on the other side of us. It was a really wonderful day and I had a great time just sitting by the fire, talking to anyone that would stop by.

Alex was at the event doing an SCA photo booth (which was AWESOME) so we could all get pictures of ourselves and our friends. (You see them above). Then it was time to pack up and head home. Mission accomplished I think. Then it was just waiting till the episode aired.


Oh and the pottage recipe if you are interested. It was based on the Pea and Bacon Pottage from the Shakespeare Birthplace Trust in the UK. Here is the original recipe: 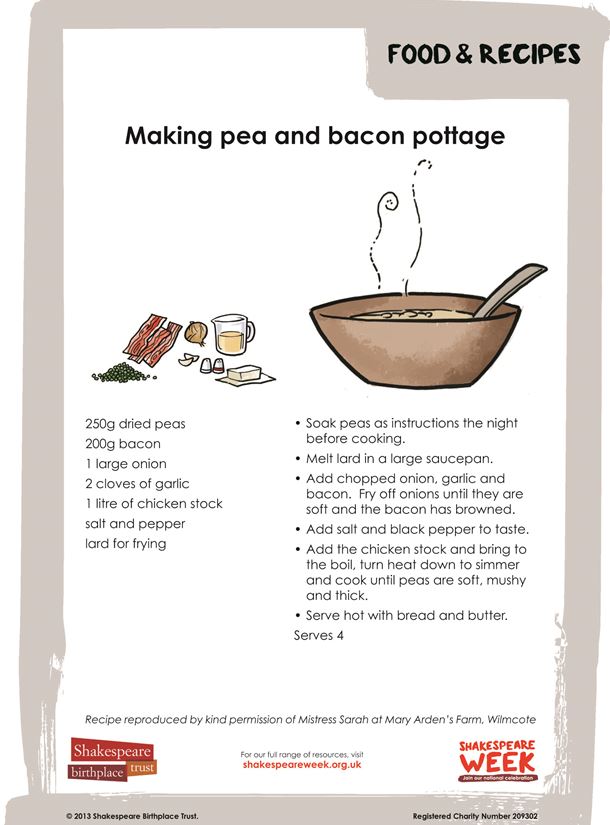 Posted by Erin T./Emelote of Calais at 3:25 PM No comments: